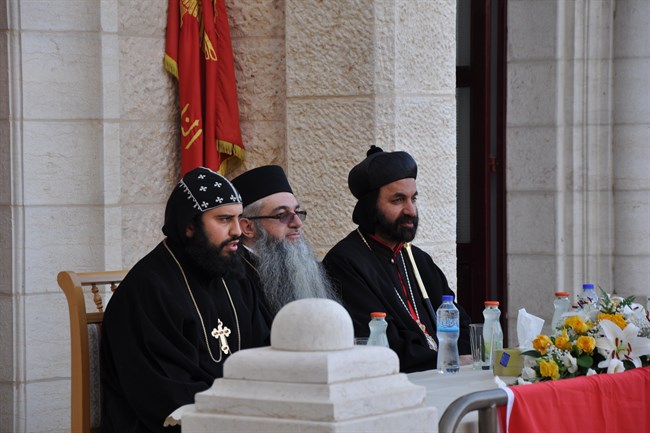 BETHLEHEM (Ma’an) — Palestinian police in the southern occupied West Bank district of Bethlehem arrested on Saturday the spiritual head of the Syrian Orthodox Church in Palestine and Jordan, Palestinian security sources said.Eyewitness and follower of the Syrian Orthodox Church Shamiran Ketlo told Ma’an that she saw Palestinian police obstructing a parade celebrating Archbishop Sewerios Malki Murad’s visit to Bethlehem on the main road to the Church of the Nativity, before taking him into custody.Murad was returning from a Syrian heritage celebration held at the Bethlehem Convention Palace in al-Khader south of Bethlehem.Palestinian police spokesperson Luay Irzeikat said the Syrian archbishop was arrested over alleged civil charges following a decision by the general prosecution, without giving further details.Ketlo told Ma’an that followers of the Syrian Orthodox Church appeal to Palestinian President Mahmoud Abbas to release Murad, who is based in occupied East Jerusalem’s Old City.“Followers of the Syrian Orthodox Church have threatened to leave Palestine and seek refuge in any other country if archbishop Murad is not released,” Ketlo said. Imprisonment of a spiritual leader like Murad leaves Syrian Christians in Palestine feeling unprotected, she added.A shrinking community of approximately 5,000 Syrian Christians resides in the occupied Palestinian territory, the descendants of Aramaic-speaking families who fled Ottoman massacres across southeastern Turkey during the 1910s.In Bethlehem in the occupied West Bank, Syriacs are a prominent part of social life. However, since Israel illegally occupied East Jerusalem in 1967, hundreds of Syrian Christians have been expelled from their homes and businesses in the city.