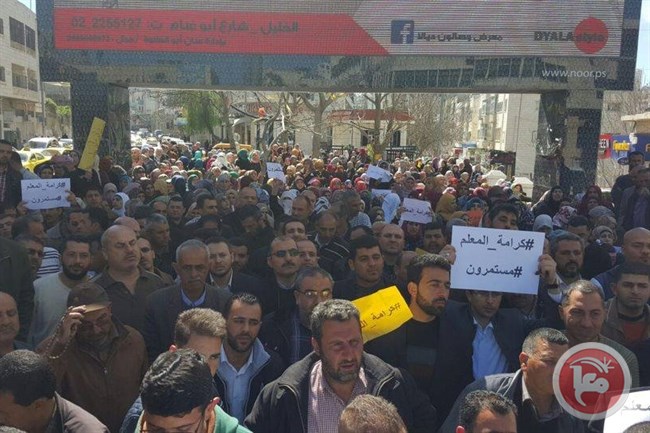 QALQILIYA (Ma’an) — Unidentified armed men opened fire at the vehicle of the head of the teachers’ movement late on Wednesday in the northern occupied West Bank district of Qalqiliya.Jamal al-Qaddumi told Ma’an that men riding motorcycles stopped in front of his building in the city of Qalqiliya and fired 14 bullets at his parked vehicle before fleeing the scene.Al-Qaddumi only reported material damage to his car. He added that security services arrived at the scene and opened an investigation into the incident.Al-Qaddumi said that he was affiliated with the Fatah party and had supported Palestinian President Mahmoud Abbas’ decision on March 12 to end a four-week teachers’ strike.Thousands of teachers defied attempts by Palestinian Authority security forces to stifle demonstrations, as they sought higher salaries pledged to them by the PA in a 2013 agreement which was never implemented.The strike caused serious tensions in the Palestinian territory, with several small-scale attacks by unidentified assailants targeting teachers both supporting and opposing the teachers’ movement.