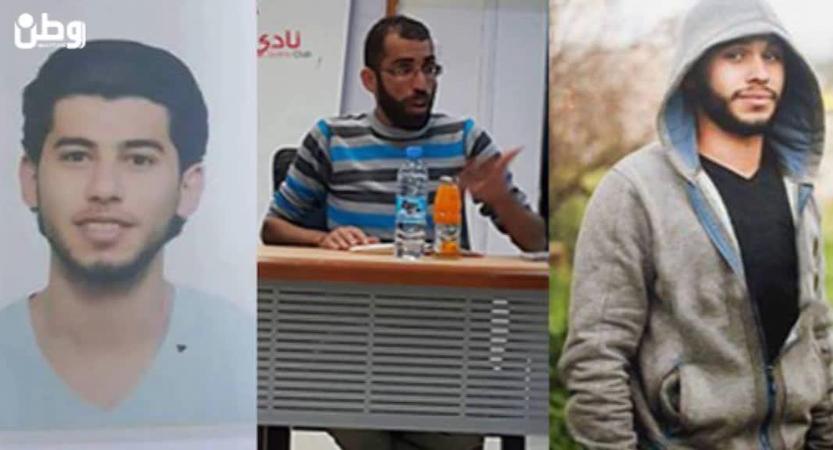 BETHLEHEM (Ma’an) — The Palestinian Authority has extended the detention of five young Palestinians, prisoners’ rights organization Addameer reported Monday, after their arrests sparked criticism of the Palestinian government’s security coordination with Israel.The Palestinian magistrate’s court extended the detention of Basil Mahmoud al-Aaraj, 33, Muhammad Abdullah Harb, 23, Haytham al-Sayyaj, 19, Muhammad al-Salamin, 19, and Ali Dar al-Sheikh, 22, for further interrogation, Addameer said, adding that the five prisoners had been subjected to ill-treatment.An Addameer attorney reported that while in custody, the five young men were endured “stress positions, sleep deprivation, continued interrogation, beating all over the body, insults and denial of using bathroom.”The detainees have also been denied access to attorney visits despite a previous agreement on the matter, Addameer added.“Addameer condemns the use of torture and ill-treatment under any circumstances and considers this to be a non-derogable norm, to which individuals must be held accountable,” the organization’s statement read.“Addameer holds that the Palestinian Authority must comply with the conventions to which it is a party, especially considering the ongoing deteriorating human rights situation in the occupied territories.”Al-Aaraj, Harb and al-Sayyaj were detained by Palestinian security forces on Saturday, in a move slammed by the Hamas movement as collaboration between PA and Israeli authorities to thwart a planned attack inside Israel.Hamas spokesman Husam Badran alleged in a statement on Saturday that Israel has detained dozens of Palestinians just after their release from PA jails since a wave of unrest increased in October 2015, as part of “escalating security collaboration” with the Israeli authorities.Badran accused the PA of “adopting a revolving door policy, where pro-intifada activists illegally detained by the PA would be released and then arrested by the Israeli occupation shortly after.”The Fatah-dominated PA and Israeli forces have worked in coordination since the Oslo Accords in 1993, which planned for a gradual power transfer of the occupied West Bank from Israeli forces to the PA over the course of five years.More than 20 years on, any transfer of power has yet to take place. Saturday’s condemnation is the most recent criticism by Hamas and other groups who repeatedly accuse the PA of aligning with Israel’s goals in the occupied West Bank, and recently of preventing a sustained uprising against Israel.