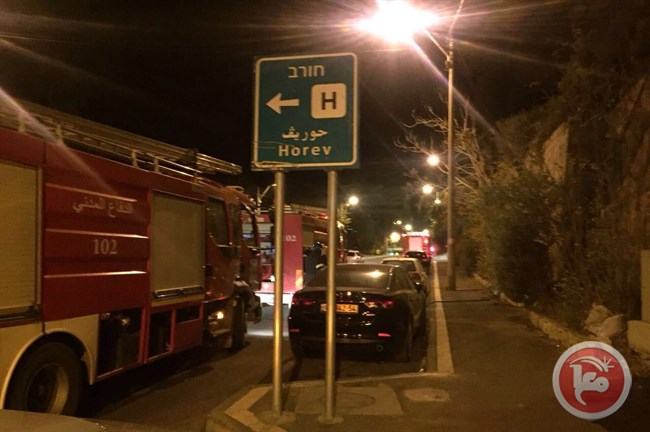 In pictures: Palestinian Civil Defense assists in putting out fires in Haifa, Jerusalem

Spokesperson of the Palestinian Civil Defense, Nael al-Azzeh, told Ma’an that eight back-up crews arrived in Haifa and cities in Jerusalem during pre-dawn hours on Friday, and began putting out fires alongside Israeli and international firefighting crews.
Al-Azzeh added that 41 members from the Ramallah and Jenin Civil Defense crews were divided into two units. The first headed to Jerusalem and the other to Haifa. He added that the crews were expected to continue working for three days.
While the fire has continued to spread into Jerusalem and parts of the occupied West Bank, according to Israeli newspaper Haaretz, the wildfire in Haifa has been contained, but 35 firefighting teams were expected to remain, including four from the occupied Palestinian territory.
A fire, suspected of being caused by a firebomb, has spread toward the Israeli town of Nataf in Jerusalem, forcing the residents to evacuate, Haaretz reported, while fires have continued scorching lands in the occupied West Bank.
Meanwhile, at least 16 Palestinians have been detained by Israeli forces over suspicions of arson, and “incitement” over Facebook, which was later found to be a mistranslation of an Arabic post by a Palestinian journalist.
Israeli authorities have claimed that the fires were started by “political arson” against the Israeli state. However, other sources have said the fires were likely caused by a combination of extreme winds and a drought.