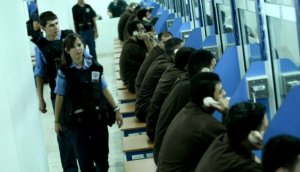 BETHLEHEM (Ma’an) — Israeli police have reportedly demanded that Palestinians from the occupied West Bank who are caught working illegally in Israel be made to pay for private Israeli security companies to escort them to court hearings in Israel, Israeli media reported on Tuesday.

According to Israeli newspaper Haaretz, Israeli forces typically provide armed escorts to transfer Palestinians with West Bank IDs to courts inside Israel.
However, Haaretz reported that the police had canceled escorts for Palestinian defendants in the West Bank, and instead demanded that the Palestinians look into hiring private security firms, which often charge thousands of shekels, to escort them to their court hearings inside Israel.
Tens of thousands of Palestinians seek work inside Israel and its illegal settlements due to high unemployment rates in the occupied Palestinian territory, where the nearly half-century Israeli military occupation has stifled economic growth.
Unlike Palestinians with Jerusalem IDs, Palestinians in the West Bank must apply for a special work permit to enter Israel for employment. Israel also places strict conditions on Palestinians seeking work that prevent many from obtaining permits, including limiting Palestinian employment to specific sectors in the Israeli economy based on quotas of Palestinian workers in each sector and imposing age restrictions that block many young Palestinians from obtaining permits.
Haaretz reported that when these undocumented Palestinian workers were caught by police, transferred back into the West Bank, and given a court date, many were unable to attend their court hearings due to a lack of Israeli security escort.
This has led Israeli judges to cancel the indictments in a number of cases in which Palestinians were unable to attend hearings due to their inability to pay private security firms, which cost as much as 5,000 shekels ($1,350) per day, according to Haaretz.
Haaretz also highlighted that Israeli security sources were also confused by the police decision, with one source quoted as saying: “If we’re talking about people the Shin Bet [Israel’s internal security agency] decided are prohibited from entering, how can it be that a private security company hired by the accused will secure him during the time he is in Tel Aviv or Petah Tikva?”
Israeli authorities have imposed a massive crackdown on undocumented workers in Israel since 2015, when a wave of violence first erupted across the occupied Palestinian territory and Israel. Detentions of undocumented Palestinians in Israel initially surged following a deadly attack in the Israeli port of Jaffain March, carried out by a Palestinian who had illegally crossed the border out of the occupied West Bank.
“For Palestinian workers who regularly enter Israel illegally to earn a living, life is a constant struggle for survival and returning home safe and sound from work cannot be taken for granted,” Israeli human rights NGO B’Tselem said in a report in 2014.
“They live in constant anxiety, fearing arrest or injury. In such a reality, labor rights such as a minimum wage, reasonable work hours, and a pension scheme seem like a distant dream.”
B’Tselem spokesperson Sarit Michaeli told Ma’an last year that Palestinians entered Israel because they had been driven by “immense poverty and a lack of employment” inside the occupied West Bank.
“When you look at the factors forcing Palestinian laborers unlawfully into Israel, you understand why it is a human rights issue,” she said.
While Israel may be free under international law to seal its borders, she said its continued occupation of the Palestinian territory and its effective crippling of the Palestinian economy meant it was “obligated to find ways to bring Palestinian laborers into Israel.”
DetentionIsraeli occupation violationsPenitentiary System
All Governorates
2017-02-21
yassminesaleh
Previous Israeli court sentences Palestinian boy with leukemia to 3 months in prison
Next Nablus police pursue man from Balata refugee camp in failed ambush operation