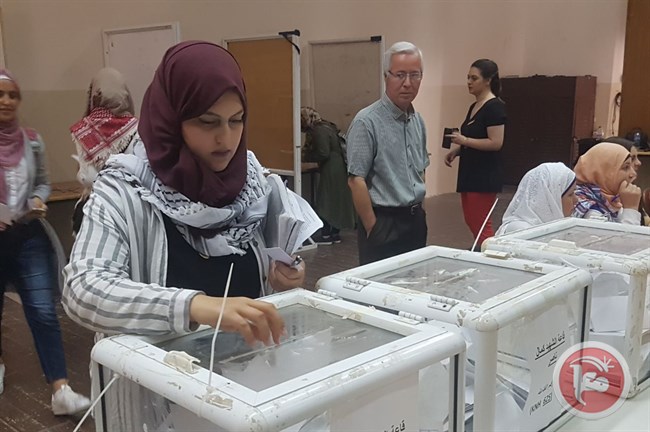 BETHLEHEM (Ma’an) — The student group affiliated with the Hamas movement won the most seats in student council elections in Birzeit University in the central occupied West Bank on Wednesday, the school reported, marking the third year in a row that the Islamist faction beat the Fatah-affiliated student group.

In a press release Wednesday evening, Birzeit university reported that the al-Wafaa Islamic Bloc won 25 of the 51 student council seats, compared to the Martyr Yasser Arafat faction, which seized 22 seats.
The Democratic Progressive Student Pole (al-Qutub), affiliated with the Popular Front for the Liberation of Palestine (PFLP), won four seats, while other competing factions did not gather enough votes to claim any seats.
The Islamic Bloc maintained the same number of seats as in the 2016 student council elections, while the Martyr Arafat faction gained one seat, at the expense of al-Qutub.
Dean of Student Affairs Muhammad al-Ahmad said that 74 percent of the university’s 10,859 students had participated in the election.
The Birzeit student elections are closely watched by political observers across the country, as the university is considered to be the West Bank’s most prestigious center of higher education and a hub of political activism.
Although outside political parties do not take part directly in the contest, each list is closely affiliated with a political party, as are the students involved in the campaigns.
Critics have accused political parties of pouring money into their respective student groups, increasingly turning the student elections into a plebiscite over national politics as opposed to student issues.
However, others have highlighted the difficulties in drawing clear-cut lines between student politics and national politics, as many believe the struggle to improve education and campus life is intimately connected to the fight against the Israeli occupation.
Birzeit University President Abd al-Latif Abu Hijleh hailed participation in the elections on Wednesday as an example of students exercising “one of the fundamental exercises of democracy,” adding that Birzeit sought “to contribute in promoting peaceful, democratic, and inclusive societies.”
Meanwhile, the Hamas party congratulated the al-Wafaa bloc for its victory, adding that it saw it as a sign of Palestinian youth embracing the Islamist movement and standing in support of Palestinian prisoners and resistance against the occupation.
In the absence of national Palestinian elections for more than a decade, university elections are seen as an important indicator of public opinion.
Birzeit’s student elections have gained particular prominence due to the fact that very few other universities in the occupied Palestinian territory hold transparent elections — whether due to pressures from Hamas authorities in Gaza preventing student elections from taking place, or allegations of corruption, vote fixing, and intimidation by Palestinian Authority (PA) security forces in the West Bank.
The Islamic bloc’s victories since 2015 — its first since 2007 — took observers by surprise at the historically staunchly pro-Fatah campus. However, some believe that the popularity of Hamas-affiliated groups among university students is not as much due to a growing support of Islamist ideologies as it is a rejection of the Fatah-led PA and its complicity in maintaining the Israeli occupation, notably through its highly contested security coordination with Israel.
Birzeit University, the top university in Palestine and among the highest-ranking universities in the Arab world, has been the focus of an Israeli military crackdown, particularly after the Islamic bloc won student elections at Birzeit in 2016 for the second consecutive year.
Wednesday’s elections came hours after Israeli forces detained three Hamas-affiliated Birzeit studentsfrom their dormitories overnight.
The three students were identified by Hamas and Palestinian security forces as student council head Ahmad al-Ayish; student council public relations committee secretary and former student council head Amr al-Rimawi; and Ahmad Faraj.
Palestinian prisoners’ solidarity network Samidoun said in March that some 60 Birzeit University students and hundreds of other Palestinian students from other universities were being held as political prisoners by Israel. “Indeed, students are specifically targeted for arrests, especially as annual Palestinian student elections approach,” the group warned at the time.
Electoral processesHuman RightsTransparency and Accountability
Ramallah and Al-Bireh
2017-05-10
yassminesaleh
Previous Executing Palestinians is Israeli policy
Next Hamas cracks down on Gaza journalists