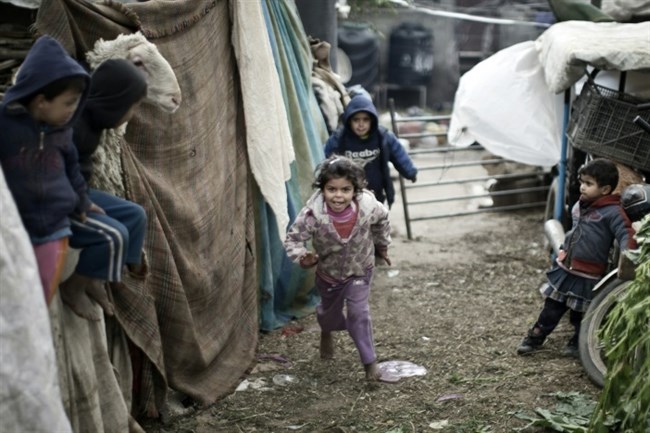 RAMALLAH (Ma’an) — On the occasion of the International Day for Protection of Children on Thursday, the Palestinian Authority (PA) denounced the continuous harm brought unto Palestinian children by Israel since the Second Intifada.

According to the Palestinian Ministry of Information, Israeli forces killed 3,000 Palestinian minors between 2000, when the Second Intifada began, and April 2017.
During the same time period, the ministry estimated that another 13,000 children were injured by Israeli forces.
According to Ma’an documentation, 72 Palestinian minors have been killed by Israelis since the beginning of a wave of unrest across the occupied Palestinian territory in October 2015, with the youngest victim being an eight-month old baby killed by excessive tear gas inhalation during clashes.
The Ministry of Information added that some 12,000 Palestinian children were detained by Israel in the span of 17 years, adding that the overwhelming majority of them were beaten or tortured while in Israeli custody, handcuffed, blindfolded, and forced to confess to charges in the absence of a lawyer or guardian.
According to Palestinian prisoners rights group Addameer, 6,300 Palestinians, 300 of whom minors, were imprisoned by Israel as of April. Earlier this year, the group denounced the fact that hundreds of Palestinian children held in Israeli custody “are tortured, ill-treated, placed in solitary confinement, and coerced into signing a confession in Hebrew, a language which most Palestinian children do not understand.”
The PA estimated that while 700 children were detained by Israeli forces each year on average across the occupied Palestinian territory, some 2,000 children had been detained since October 2015 over claims of “disrupting public order” by committing acts such as throwing rocks.
Israel detains hundreds of Palestinians for alleged stone-throwing every year, and Israeli rights group B’Tselem reported that from 2005 to 2010, “93 percent of the minors convicted of stone throwing were given a prison sentence, its length ranging from a few days to 20 months.”
Palestinian stone-throwers, many of whom are minors, face harsh penalties by Israeli authorities, including up to 20 years in prison if charged with throwing stones at vehicles and a minimum prison sentence of three years for throwing a stone at an Israeli.
In addition to the violence inflicted by Israeli forces, the ministry deplored the effect of the decaying economic situation across the occupied Palestinian territory, particularly in the besieged Gaza Strip, on Palestinian children, forcing many children to drop out of school and join the labor market.
Quoting a 2013 report by the Palestinian Central Bureau of Statistics, the ministry stated that 4.1 percent of Palestinians between the ages of 10 and 17 were in the work force, while a more recent report by the Palestinian Ministry of Labor estimated that 102,000 Palestinian minors were working.
The Ma’an Development Center — which is not related to Ma’an news agency — has attributed the significant rate of child labor to poor conditions in Palestinian schools, particularly in rural areas of the occupied West Bank, where severe shortages of supplies and funding , as well as the long distances children need to travel to attend class, push many to drop out.
The Ministry of Information, meanwhile mentioned the case of Palestinian children in occupied East Jerusalem, 85 percent of whom live under the poverty line, who face a 40 percent drop-out rate in high schools, notably due to an estimated shortage of 1,000 classrooms in the city.
Palestinian schools have also been the targets of demolitions and army raids at the hands of Israeli authorities, severely affecting pupil’s educational environment and general well-being.
Human RightsIsraeli occupation violationsTransparency and Accountability
All Governorates
2017-06-01
yassminesaleh
Previous Monthly Incitement Report for May 2017 – Special Edition: The Status of Jerusalem
Next Israeli forces critically injure Palestinian woman after stabbing attack near settlement