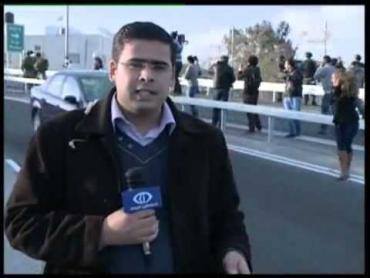 Ramallah – (9/7-2017) – The Palestinian Center for Development and Media Freedoms (MADA) is gravely concerned about the drastically rising number of Palestinian Violations and the continuation and escalation of internal violations against media freedoms.

As the most recent of which, was the arrest of the correspondent of “Palestine Today” channel, Jihad Barakat, by the Palestinian Preventive Security (PSS), resulting from, covering the Palestinian Prime Minister procession at an Israeli military checkpoint on the entrance to Tulkarem City / West Bank on Thursday (6/7/2017).

The arrest of the journalist Jihad Barakat was monitored during the continued arrest of Al-Aqsa TV photographer Ahmad Fathi Al-Khatib by the Preventive Security Service since 01/07/2017.

Besides, the arrest of Palestine TV channel correspondent Fouad Jaradah for more than a month (arrested on 08/06/2017) by the Palestinian Internal Security in Gaza Strip. Rather than, the arrest of two other journalists, in relation to  their professional work, Thaher Al-Shamali in the West Bank and Hasan Jaber in Gaza Strip (both were released).

The escalating attack against media freedoms culminated in the Palestinian Authority’s blocking 29 news websites, resulted in, a significant increase in Palestinian violations to unprecedented levels in terms of numbers and gravity.

Moreover, these violations were accompanied with the ratification of the (Electronic Crimes Law/ cybercrimes) without engaging the Palestinian public or even presenting the draft to Civil Society Organizations, who were surprised by the ratification of this law on the eve of Eid-Al Fitr holiday.

The Palestinian Center for Development and Media Freedoms MADA- affirms the necessity of complying with the Palestinian Basic Law, which guarantees the respect of freedom of opinion and expression and the rights and freedom of the media, it also prohibits Censorship of the media as “No warning, suspension, confiscation, cancellation or restriction shall be imposed upon the media except by law, and pursuant to a judicial ruling”.[1]

The center also calls the Palestinian Authority to abide by its obligations under the International Human Rights Law, and all treaties that were ratified in 2014, Particularly the International Covenant on Civil and political rights (Article 19) that guarantee freedom of expression and opinion.

In conclusion, MADA demands the immediate release of the three arrested journalists in West Bank and Gaza Strip (Jihad Barakat, Ahmad Khatib and Fuad Jaradeh) and to stop all various forms of persecutions against journalists and Palestinian media outlets. Besides, the urgent need to freeze the (Electronic Crimes law) and refrain from publishing it on the official gazette only after subjecting the draft to a public debate and reaching a law that serves its intended purposes without prejudice to the freedom of expression.