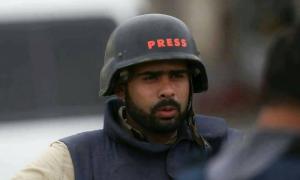 Yesterday, 8 July 2017, The Public Prosecutor’s Office in Ramallah extended the detention of Palestinian journalist Jihad Barakat for 48 hours. Addameer’s lawyer Anas Al-Barghouthi said that interrogation with Barakat was about “taking photos” of the motorcade of PA Prime Minister Rami Hamdallah near a checkpoint east of Tulkarem.

Journalist Jihad Barakat was arrested on Thursday, 6 July 2017, at Anab checkpoint by men wearing civilian clothing riding a tourist car. They identified themselves as Preventive Security Forces and took him to the Preventive Security Service in Tulkarem. Despite attempts by Addameer’s attorney to obtain information about him and to visit him since his arrest, the legal advisor in Tulkarem denied that Barakat was seized by PA security forces and prevented the lawyer from visiting him. Addameer’s lawyer also confirmed that they had not received any official news from the security services about the location of Barakat until Saturday, 8 July 2017, at 10:00 am, despite repeatedly asking them about his location. The security services informed Addameer’s attorney that Barakat was transferred to a Preventive Security Service in Ramallah. Attorney Anas al-Barghouti went immediately to visit him, and there he was told by the security service office that they did not have Barakat. They told him that Barakat was transferred to the Public Prosecutor’s Office in Ramallah. Addameer’s attorney requested the release of journalist Barakat on bail, but the prosecution rejected the request and extended his detention for 48 hours. Barakat told Addameer’s lawyer during the hearing that he had been interrogated six times since the moment of his arrest, three times in Tulkarem and three in Ramallah. Barakat said that he is under great pressure to give the PA access to his telephone and computer.

Addameer Prisoner Support & Human Rights Association strongly condemns the arrest of journalist Barakat. His detention violates various Palestinian laws, including the Press and Publications Law of 1995, article 2, which states that freedom of opinion is guaranteed to every Palestinian and that he can freely express his opinion in writing. It also contravenes provisions of the Criminal Procedure Code, which gives the judicial officer a period of only 24 hours to hold someone, after which, the person must be either presented before the Public Prosecution or released.

Addameer demands the immediate release of journalist Jihad Barakat and stresses the need to respect Palestinian laws, freedom of the press, and freedom of expression. Addameer strongly condemns the frequent arrest and detention of Palestinian journalists by PA security forces, without clear legal grounds for arrest or serious offenses.