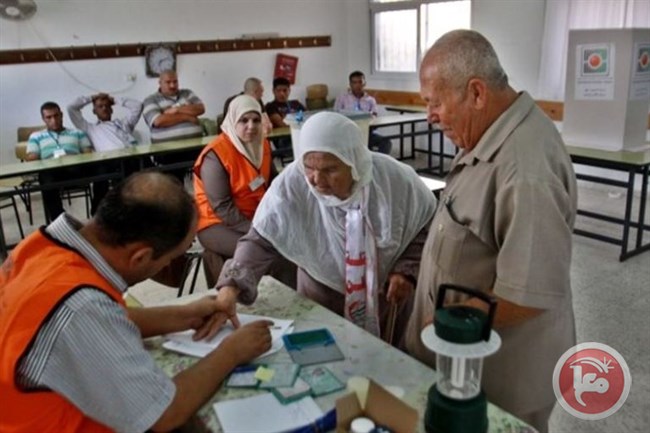 BETHLEHEM (Ma’an) — Voting closed Saturday night for “complimentary elections” held at polling stations in occupied West Bank municipalities that did not take part in regular elections held in May.

Elections were held in 14 municipalities, which had not presented electoral lists in time for the May elections.
The Palestinian Central Elections Commission (CEC) released a statement Saturday evening after polls closed at 7 p.m., saying that voter turnout reached 63.6 percent, as 27,255 out of 42,844 registered eligible voters participated.
The CEC said that “the voting process proceeded smoothly without any challenges nor recorded violations that would affect the elections results.”
Preliminary election results will be announced Sunday, to include the number of votes and seats obtained by each list, in addition to the names of winning candidates.According to the CEC, 51 nominated lists comprised of 411 candidates competed for a total of 142 designated council seats.The May 13 elections only took place in the West Bank, as Hamas, the de facto ruling party of the besieged Gaza Strip, rejected the legitimacy of the election, saying that elections should only be held after the more than decade-long rivalry between Hamas and Fatah came to an end and reconciliation was achieved.
When the timeline of the coming supplementary elections was announced on May 31, official Palestinian news agency Wafa reported that voting in the Gaza Strip would take place on Oct. 10, after complimentary elections in the West Bank.
Recent CEC statements have made no mention of coming elections in Gaza, while the political crisis between Fatah and Hamas has continued to escalate in recent months.
The Fatah-led PA has been accused of deliberately sending the impoverished Gaza Strip further into a humanitarian catastrophe in order to wrestle control of the territory from Hamas, by slashing funding for Israeli fuel, medicine, and salaries for civil servants and former prisoners.
Hamas authorities have also been accused of withholding funds collected in Gaza from the PA, as well as targeting Fatah officials in Gaza through detentions and restricting their freedom of movement.
Electoral processesGovernmentTransparency and Accountability
Ramallah and Al-Bireh
2017-07-29
yassminesaleh
Previous Israeli forces raid PalMedia headquarters in Ramallah, seize equipment and documents
Next MADA Center condemns the storming of media offices and attacks on journalists