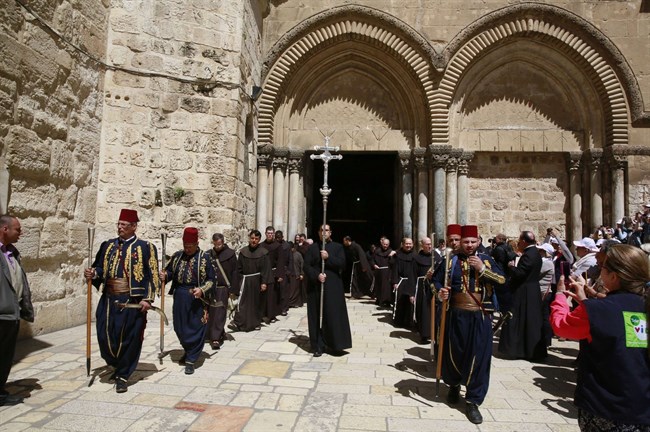 Patriarch Theophilos III spoke at a news conference in the Jordanian capital of Amman on Saturday, according to Israeli and Palestinian media, where he called the ruling “politically motivated,” and vowed to appeal the decision.
For the past decade, Theophilos III and the church have been battling the sale of three large properties near the Old City’s Jaffa Gate to a company in the Virgin Islands, with members of the Ateret Cohanim association, which settles Israeli Jews in Palestinian areas of the Old City, acting as intermediaries.
The Israeli court decision would pave the way for the three properties to be leased to Ateret Cohanimfor 99 years.
Theophilos III and the Greek Orthodox Synod have maintained that the deal, made by now-deposed formed patriarch Irineos I, is invalid, as Irineos made the initial sale without approval from the Synod.
“The church will do everything within its power so that this unjust ruling will be overturned,” Theophilos III said, according to Palestinian Authority (PA)-owned Wafa news agency, which added that the patriarch had called on the church and world leaders to “coordinate their activities and intervene to prevent this ruling from taking hold.”
The Greek Orthodox Church is one of the largest property owners inside Israel and the occupied Palestinian territory, with the Times of Israel reporting that the church came just second to the Israel Land Authority (ILA).
While Israel officially annexed East Jerusalem in 1980, according to Palestinians and the international community, the city has remained an intricate part of the occupied Palestinian territory and would be considered the capital of any future Palestinian state as part of a two-state solution.
The fate of Jerusalem has been a focal point of the Israeli-Palestinian conflict for decades, with numerous tensions arising over Israeli threats regarding the status of non-Jewish religious sites in the city, and the “Judaization” of East Jerusalem through the work of groups such as Ateret Cohanim, settlement construction, mass demolitions of Palestinian homes, and stringent laws making it difficult for Palestinians to maintain their East Jerusalem residency.
Israeli occupation violationsTransparency and AccountabilityViolent Extremism
Jerusalem
2017-08-13
yassminesaleh
Previous Israel confiscates EU aid from Palestinian Bedouin community
Next Local elections: Retreat for women, youth, factions and upsurge for clans