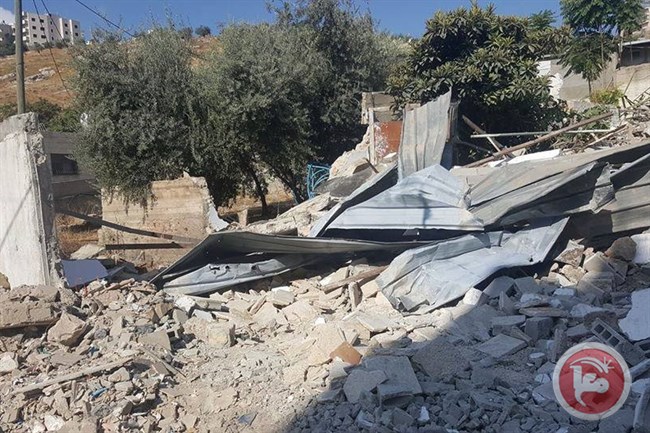 JERUSALEM (Ma’an) — Israeli authorities on Tuesday morning stormed the Silwan neighborhood of occupied East Jerusalem and demolished the same Palestinian home for the second time in a week.Witnesses told Ma’an that bulldozers, escorted by Jerusalem municipality officers and army forces, stormed the al-Bustan area of Silwan and demolished a makeshift house belonging to the Abu Sneina family.Members of the family told Ma’an that their 60-square-meter house had just been demolished on August 15. With the help of Jerusalemite activists, the family rebuilt a temporary home made of tin sheets, which Israeli forces came to destroy on Tuesday.

The family said interior works inside the structure were still ongoing when Israeli forces stormed their home on Tuesday and demolished it without prior notice.
A spokesperson for the Jerusalem municipality told Ma’an that on August 15, the municipality “executed court orders to dismantle a structure in Silwan,” adding that the demolition notice was issued and posted on the house at the end of March.

A spokesman of a Silwan-based committee formed to fight demolitions, Fakhri Abu Diab, highlighted that all 100 residential structures in the al-Bustan area are slated for demolition, and that the 1,570 residents of the area have exhausted all legal options.The residents of al-Bustan have been embroiled in a decades-long battle that began in the 1970safter the Israeli government embarked on a plan to build a national park in the area, with the city’s master plan defining the area as an open space where construction was prohibited, according to Israeli rights group B’Tselem.Due to the designation, residents have long faced great difficulties contending with demolition ordersissued against the homes that were built there without permits — mostly in the 1980s — due to the increasing population in Silwan.The municipality began issuing demolition orders and indictments to homes in al-Bustan in 2005 as part of the Israeli authorities’ plan to establish the Jewish site “King David’s Garden” in Silwan and around the “Holy Basin,” which includes many Christian and Muslim holy sites.Silwan is one of many Palestinian neighborhoods in East Jerusalem that has seen an influx of Israeli settlers at the cost of home demolitions and the eviction of Palestinian families.
According to UN documentation, as of August 4, 103 Palestinian-owned structures were demolished by Israel in East Jerusalem since the beginning of the year, displacing at least 171 Palestinians. A total of 190 Palestinian buildings were demolished in East Jerusalem in 2016.
Israeli occupation violationsSurveillanceTransparency and Accountability
Jerusalem
2017-08-22
yassminesaleh
Previous Attallah meets Interpol General Secretary in France
Next Israel confiscates children’s toys in Jenin