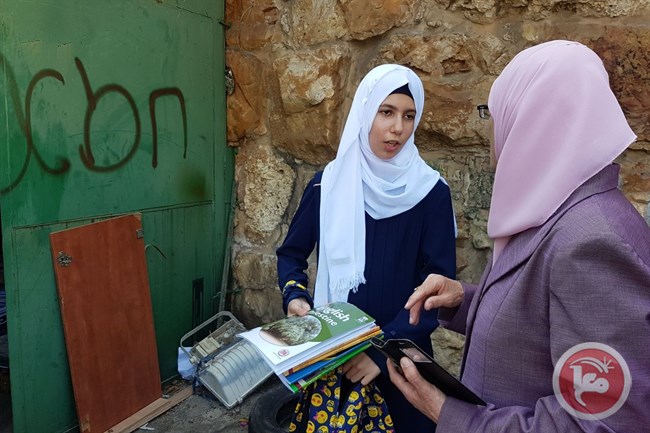 JERUSALEM (Ma’an) — Students of the Al-Aqsa Sharia School for Girls gathered outside of their campus on Wednesday to collect their textbooks, after Israeli police prevented the books from being delivered directly to the school, located inside the Al-Aqsa Mosque compound of occupied East Jerusalem’s Old City.

Head of the school, Ahad Sabri, told Ma’an the school administration was forced to distribute the books outside of the compound, near the Lions’ Gate entrance, as police continued to refuse to allow the books to be taken inside on the first day of the school year.
Two other schools inside the compound, another high school and a kindergarten, were also affected by the police ban on Tuesday. Sabri said the books were banned because they were marked with Palestinian Authority logos.
Sabri told Ma’an that it was not the first time Israeli authorities have restricted educational materials from entering Al-Aqsa. She said that just last week, Israeli forces prevented a private car from delivering a scanner to a girls’ school, forcing children to roll it through on a wheelchair.
She noted that Israeli police also prevented standard A4 paper from being delivered to the school for a two-week period last year.
According to the school director, Israeli forces also raided and searched the classrooms when the Al-Aqsa Mosque compound was closed in mid-July in the wake of a deadly shooting at the site and an ensuing mass civil disobedience campaign and boycott against new Israeli security measures there.
She said that Israeli forces confiscated electronic equipment from the school during the closure.
Back in May, the Israeli security cabinet advanced a plan pushed forward by Israel’s far-right Minister of Education Naftali Bennett to incentivize Palestinian schools in East Jerusalem to switch to the Israeli curriculum by denying the schools that teach the Palestinian textbooks financial subsidies while granting those that teach the Israeli curriculum hefty portions of financial assistance.
Palestinians say Israeli textbooks distort and misrepresent Palestinian history and culture, and the PA has described Bennett’s plan as part of an Israeli campaign to “Judaize” Jerusalem by threatening the Arab and Islamic heritage of the holy city and marginalizing Palestinian Jerusalemites.
Meanwhile, approximately 1.25 million schoolchildren started the new school year in the occupied West Bank and besieged Gaza Strip after the summer holiday ended.
The incident in occupied East Jerusalem came as the latest obstacle facing Palestinians on the occasion of the first day of school.
An entire school was seized by Israeli forces in the isolated village of Jubbet al-Dhib on Tuesday, leaving some 64 children without a school. Another school, a kindergarten, was demolished in the Bedouin community of Jabal al-Baba on August 21.
On Wednesday, the mayor of Hebron was verbally assaulted and threatened by Israeli settlers, as the mayor attempted to visit schools inside the Old City to inaugurate the first day of school. He was eventually evacuated from the area by Israeli soldiers.
The Norwegian Refugee Council released a statement Wednesday condemning what it called “a wider attack on education in Palestine.”
“In the first three months of this year there were 24 cases of direct attacks against schools, including incidents where tear gas canisters and sound bombs were fired at students on their way to or from school. Last year, four communities’ educational facilities were demolished or confiscated and 256 education-related violations were documented in the West Bank, affecting over 29,000 students,” the statement said.“Just when they were due to return to the classroom, Palestinian children are discovering that their schools are being destroyed,” NRC Country Director for Palestine, Hanibal Abiy Worku, said. “What threat do these schools pose to the Israeli authorities? What are they planning to achieve by denying thousands of children their fundamental right to education?”NRC also highlighted that Palestinian children “face on a daily basis include violence and harassment from settlers and Israeli soldiers, military activity inside or next to schools, delays crossing checkpoints, and the arrest of children from their classrooms.”
“Since 2011, the Israeli government has also threatened to withhold permits and funding to schools that are not implementing Israeli curriculums in which references to Palestinian identity and culture, the occupation, Israeli settlements and other aspects of Palestinian history were removed,” the rights group said.“We call on the governments and donors funding Palestinian children’s education to exercise all of their influence to prevent this violation in all its forms,” Abiy Worku said.