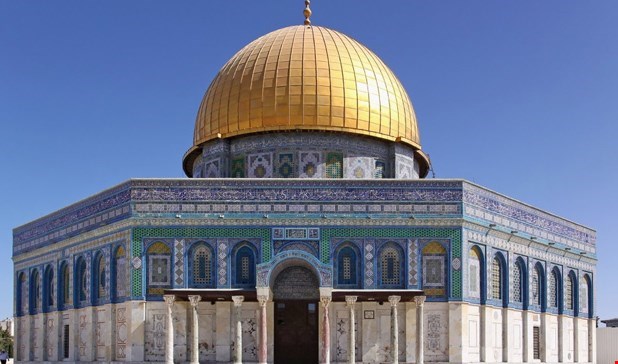 Ramallah: In an unprecedented measure against Jerusalemites and other visitors to Al Haram Al Sharif in occupied East Jerusalem, the Israeli occupation forces have banned photography inside the compound, threatening to detain anyone taking photographs of themselves and to prosecute them in court.

Observers say the draconian measure is nothing more than a spiteful punitive measure after Israel was forced to take down surveillance devices and metal detectors from the site’s entrances.

Israeli occupation forces sealed off the site for the first time since it illegally seized the area in 1967 under the pretext of security.

Two days later the holy site was reopened but Muslims were shocked to have to pass through metal detectors the occupation forces had installed at all the site’s entrances.

The occupation claims the photography ban is justified as a preventive measure because those who take them may be plotting to carry out activities that pose a threat to security at the religious shrine.

Many visitors take pictures, particularly with Al Aqsa Mosque and the Dome of the Rock in the background—two sensitive and sacred symbols in the Palestinian-Israeli conflict.

However, Fakhri Abu Diyab, who heads the local committee in defense of occupied Jerusalem, described the photography ban as yet another example of the occupation’s ‘extreme and intolerable’ measures against Muslim visitors to Al Haram Al Sharif.

Israel has mainly targeted visitors to the shrine from the West Bank and the 1948 areas, who take pictures as mementoes and publish them on their social media accounts, he told Gulf News, adding that Jerusalemites were also being targeted.

He said social media accounts were also being closely monitored, and the occupation forces would detain anyone publishing pictures taken inside the holy site.

Palestinians fear smart phones could be banned altogether from entering the holy site.

Last July, after a shootout around Al Haram Al Sharif in which two Israeli policemen were killed, Israeli occupation forces sealed off the site for the first time since it illegally seized the area in 1967.

After two days, the holy site was reopened but Muslims were shocked to have to pass through metal detectors the occupation forces had installed at all the site’s entrances.

Muslims refused to enter the compound through the metal detectors.

They staged peaceful street demonstrations and held prayers around the holy site in protest, which forced the Israeli government to remove the metal detectors.

Abu Diyab says the occupation forces still feel the taste of defeat from that confrontation, and current measures against visitors to the holy site are an act of retribution to avenge the Muslim victory.

Israel captured and annexed the eastern part of Jerusalem in the 1967 war and wants the city to be its eternal capital, while Palestinians see occupied East Jerusalem as the capital of their future independent state. This conflict over the fate of the holy city has been blamed for the breakdown of peace talks between the Israelis and Palestinians in April 2014.

Al Haram Al Sharif ‘s Al Aqsa Mosque, the third holiest site in Islam, and the Dome of the Rock have been flashpoints in the Palestinian-Israel conflict as the occupation forces impose severe measures against Jerusalemites and other visitors.