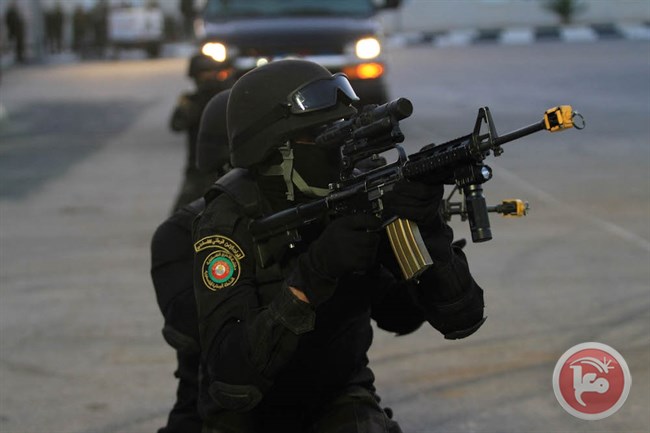 BETHLEHEM (Ma’an) — Palestinian security forces shot and killed a man and critically injured another early Wednesday morning in the town of Yatta in the southern occupied West Bank district of Hebron, according to security sources that said police sought to arrest the men on criminal and drug-related charges.

Security sources told Ma’an that security forces received a tip at 3 a.m. regarding suspects opening fire into the air from a vehicle in the streets of Yatta city.
Adnan Damiri, the spokesman of the Palestinian security forces, was quoted by Palestinian Authority-owned Wafa news agency as saying that the tip specifically regarded the whereabouts of 34-year-old Abed al-Jalil al-Haroush, who has been sentenced in absentia by a Palestinian court on criminal grounds. A security source told Ma’an his name was Abed al-Jalil al-Haroush al-Obeid.
A joint forces patrol headed to the area and when they asked the driver to pull over, people inside the vehicle opened fire at police, injuring a member of the Palestinian National Security Forces with live fire, according to the security source.
Forces responded by opening fire at the vehicle, shooting and killing al-Obeid and critically injuringanother, identified by Damiri as Fawzi Abu Tabikh. The other security source told Ma’an Fawzi’s surname was Abu Sbieh.
The two were taken to the Abu al-Hussein al-Qassem Hospital in Yatta where al-Obeid was pronounced dead and Abu Sbeih’s injury was reported to be medium to critical.
The injury of security forces member was reported as medium.
Security sources added that another “wanted man” was arrested at the scene and that ammunition, drugs, and alcohol were found inside the vehicle.
Damiri said the incident was under investigation.
A video circulated on social media purporting to show the events, in which a police vehicle can be seen driving down the street followed by the sound of gunshots.
The killing comes after Palestinian security services said Tuesday that “one of the most dangerous fugitives” in the Hebron district, known as “al-Dahbour,” had been arrested. The PA said he was accused of illegal drugs and weapons trading, threatening civilians at gunpoint, among other crimes.
The PA has launched a massive security crackdown to seize weapons and detain “wanted criminals” across the occupied West Bank, in a fierce campaign seen as a part of the government’s widely-criticized security coordination with Israel, which has been denounced by Palestinian factions as a “revolving door policy” of funneling Palestinians from PA jails in Israeli prisons for the same offenses.
The PA has also been accused of continuing to carry out politically-motivated attests despite a recent pledge by Palestinian President Mahmoud Abbas to put an end to security coordination with Israel.
Amid the ongoing security crackdown, the PA has faced widespread criticism over the unclear circumstances in which Palestinian fugitives have been arrested and killed, and in some cases has been accused of carrying out extrajudicial executions. A number of Palestinian security officers have also been killed in the violence.
CriminalityInvestigationsSecurity Operations
Hebron
2017-09-13
yassminesaleh
Previous Israeli army shoots Palestinian attempting stabbing
Next Why is Human Rights Watch urging engagement with Israel’s banks?