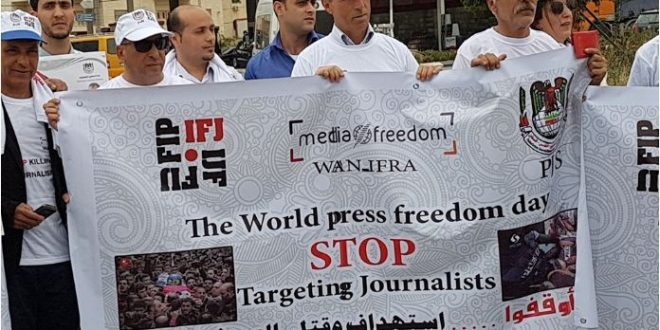 On Sunday, tens of Palestinian journalists staged a peaceful march in the West Bank city of Al-Bireh, protesting against Israeli violations against their work, Quds Press reported.

Marking World Press Freedom Day, the journalists gathered in the Palestinian city after participating in an information conference and headed towards the entrance of the city where an Israeli military checkpoint and illegal settlement, Beit El, are located.

During conference, the speakers spoke about the “dangerous” Israeli violations against journalists, stressing that these violations are “crimes committed by the orders of the political leadership.”

They noted the latest violations included the murders of journalists Yasser Murtaja and Ahmed Abu-Hussein, who were killed during the coverage of the peaceful Great March of Return in Gaza.

Head of the Syndicate of Palestine Journalists Nasser Abu-Baker revealed that “these are efforts being exerted to bring the perpetrators of crimes to the International Criminal Court.”

Abu-Baker stressed that the Israeli crimes are intended to wipe out the Palestinian narrative so that only the Israeli accounts are told.

The journalists, who participated in the march, wore identical uniforms with slogans written on them, criticising the Israeli aggression and calling on the Israeli occupation to stop killing Palestinian journalists.