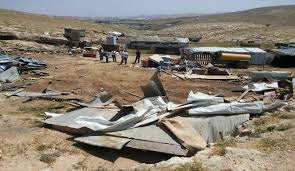 An attempt to remove a great tree that has deep roots is perhaps the closest analogy of what took place on Wednesday in Al-Khan Al-Ahmar. This is a Palestinian Bedouin gathering, east of Jerusalem, which the Israeli occupation forces tried to destroy by expelling the people by force after a lot of pressure was put on them accompanied by government decisions and unfair eviction and demolition orders.

The scenes of brutality and abuse were recorded for all to see, horrible and almost unbearable. Palestinian children were in a panic, screaming and watching the forced evictions and abuse of their parents by Israeli police and soldiers. Mothers were dragged along the ground and tied up; their backs were stood on by Israelis and their faces were buried in the sand.

Tragic cruelty, humiliation and intimidation has culminated with Israel’s official campaign against Al-Khan Al-Ahmar. The issue has escalated over recent years. The victims are the Arabs of the Jahalin Bedouin, whom the occupation authorities no longer wish to see so they decided to expel them from the area at any cost. This was all part of the colonial plans to tighten Israeli control and expansionist settlement plans throughout East Jerusalem and parts of the West Bank classified as “Area C” under the Oslo Accords. The residents of Al-Khan Al-Ahmar have been experiencing harsh conditions in recent years, such as house demolition orders and school closures along with constant threats of forced eviction as well as physical threats from nearby Jewish settlers.

Israel’s campaign against the Palestinians in Al-Khan Al-Ahmar is a mini-Nakba that rekindles the memory of the Great Nakba that was inflicted on the people of Palestine exactly seventy years ago. Zionist terrorist groups, which did not belong to this land, started to initiate the mass expulsion of the indigenous Palestinian people in a well-planned and deliberate act of ethnic cleansing which is ongoing, as evidenced by the decisions of the occupation courts and administrative bodies. The Israeli concept of a “state of law” is to have the law operate solely to enable the control, oppression and abuse of the Palestinians while providing the necessary cover for the war crimes committed, if and when such a fig leaf is required. Thus, the laws and court decisions in favour of the occupation and colonial settlements keep unfolding; it was no surprise that the Israeli Supreme Court supported the demolition and expulsion procedures used in Al-Khan Al-Ahmar.

The brutal onslaught against the people there demonstrated the contempt held by Israel for the warnings and criticism from European capitals; nor did the Israelis care a jot about the moral warnings issued by many human rights organisations and hundreds of public figures around the world. The occupation authorities went ahead with their campaign to demolish this Palestinian community, despite repeated calls and demands for them to stop this “war crime”, which is how it was described in an expanded petition issued on 11 June signed by more than three hundred international figures — former Prime Ministers, Nobel laureates, intellectuals, artists and writers, as well as faith leaders and global civil society — who condemned the forced displacement of the Palestinian gathering.

The signatories were right to call this a war crime. Israeli Prime Minister Benjamin Netanyahu, Defence Minister Avigdor Lieberman and Supreme Court judges were also accused as the people behind the decision to demolish homes and structures in Al-Khan Al-Ahmar. The Israeli government will be held accountable one day for its political and administrative responsibility for this decision.

However, the Israeli occupation government has continued to force Palestinian residents to leave by creating unbearable conditions for communities in the targeted locations. It is a quiet pattern of war crimes. Israel does this by preventing the Palestinians from building their homes or schools; depriving them of access to water, electricity and infrastructure; and prohibiting the paving of roads that connect them to the world, in addition to threatening them with the destruction of their communities and facilities.

Although the petition was written in English and Hebrew to send a direct and understandable message to the world and to the leadership of the occupation, Israel has demonstrated yet again its rejection of legal or moral appeals backed by international law. The Israeli government is engaged in a race to carry out mass evictions, deportations, demolitions and the confiscation of land in order to alter the demography of the occupied Palestinian territories. It is absolutely true that they are currently taking advantage of having a US President in the White House who is ardently more of a Zionist than his predecessors, and they were all fully pro-Israel.

The world warned Israel in advance that its policy in Al-Khan Al-Ahmar breaks international law. Warnings are also issued regularly that Israeli settlements break the same laws and conventions. In fact, the expansion of settlements around Jerusalem, cutting the West Bank into two separate parts and isolating the holy city completely from its West Bank hinterland, is a threat to the possibility of establishing a viable and contiguous Palestinian state, deliberately so, of course. A number of countries and international organisations and committees, some of them affiliated to the UN, have warned about Israel’s plan to do this. The UN has issued reports expressing concerns about the Israeli demolitions and sent envoys to Al-Khan Al-Ahmar in solidarity with the Palestinian residents.

Demolition of Khan Al-Ahmar: Another chapter in the ethnic cleansing of Palestine

Now, though, the outcome is clear. Softly worded expressions and warnings based on international law have been met with silence from successive Israeli governments. The Israelis are pursuing their programme of ethnic cleansing relentlessly, because they know that warnings and condemnation will not be backed by action. The bottom line, therefore, is that the world is contributing to this mini-Nakba by failing to stop it. The same scenario was played out before, during and after the 1948 Nakba.

What has befallen the people of Al-Khan Al-Ahmar is planned by Israel to be the fate of other Palestinian towns and villages near Jerusalem and in Area C. Thousands more Palestinians are set to be thrown off their land to enable Israel to impose yet more “facts on the ground”, that terrible phrase which hides the brutal reality of the Israeli occupation.

Unless and until sanctions are imposed on the occupying power with its aggressive security forces and arrogant government; unless it is boycotted on every level; unless the generous investments in its industries are ended; and unless all forms of favourable trading terms and treaties between the Zionist state and Europe and other democracies are terminated, Israel’s attack on human rights and breaches of international law will continue throughout the occupied Palestinian territories. If this is allowed to happen, then justice, human rights and international law will be seen as little more than hollow slogans without any actual commitment to do something about the reality of Israel’s occupation of Palestine.

Human RightsIsraeli occupation violations
All Governorates
2018-07-10
raedsadeq
Previous Mahmoud Abbas may well be shooting himself in the foot, but where is Fatah?
Next Israel adopts racist Jewish nation-state law