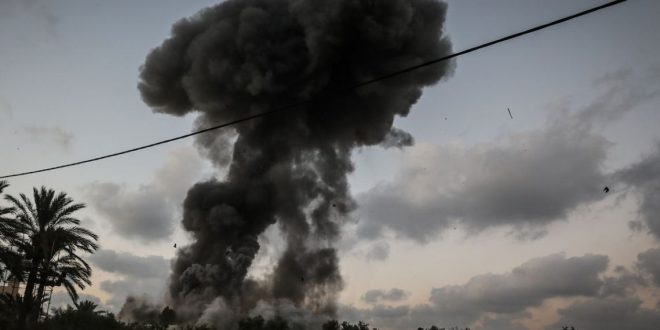 Israel and Hamas have agreed to restore calm in the Gaza Strip, according to a spokesman for Hamas.

“With Egyptian and United Nations efforts it has been agreed to return to the era of calm between [Israel] and Palestinian factions,” Hamas spokesman Fawzi Barhoum told Reuters.

Egyptian security officials and a diplomat from another unnamed state were holding contacts with Hamas and Israel in an effort to restore calm and prevent further deterioration, an unnamed Palestinian official told Reuters. Gaza was relatively quiet after midnight (local time), residents said.

The Palestinian official said: “Egypt has managed to restore calm through talks with the two sides in Israel and in Gaza … We hope it lasts.”

Hamas issued a statement holding the Israeli occupation fully responsible for the consequences of its latest attack on the Gaza Strip.

A spokesman for the movement Fawzi Barhoum said: “The Palestinian resistance’s retaliation is internationally guaranteed and is carried out for one purpose; to defend the people of Gaza.”

“It’s also the resistance’s national duty to deter the Israeli occupation from imposing its own rules of engagement upon innocent civilians,” Barhoum added.

Read more about it here.

The first incident took place in the Khan Yunis and Rafah areas in the southern Gaza Strip, where Israeli tanks and aircraft targeted sites belonging to Ezz Addine Al-Qassam Brigade killing three of its members.

The second incident took place at the return marches, where a young man was killed and 120 others were wounded by Israeli army gunfire and tear gas.

Read more about it here.

Using tanks, warplanes, and artillery fire, on Friday the Israeli army launched a major attack on the Gaza Strip, allegedly in response to gunfire towards its soldiers along the border, according to Israeli sources.

Israeli war jets are hovering over Gaza, said the official, speaking on condition of anonymity, but did not give any end date for the offensive.

Stressing that the army is on high alert, the statement said: “Hamas chooses to escalate tension and will bear the consequences of these actions.”

According to the Israeli media, Prime Minister Benjamin Netanyahu arrived at army headquarters in Tel Aviv to review the situation in Gaza. No statements have been issued by Netanyahu or the army.

Since the current round of demonstrations began on March 30, more than 140 Palestinian protesters have been martyred — and thousands more injured – by Israeli army gunfire.

Protesters are demanding the “right of return” to their homes and villages in historical Palestine, from which they were driven in 1948 to make way for the new state of Israel.

They also demand an end to Israel’s 11-year blockade of the Gaza Strip, which has gutted the coastal enclave’s economy and deprived its roughly two million inhabitants of many basic commodities.