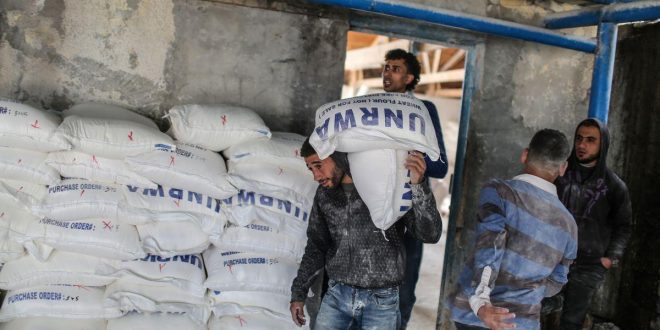 Palestinians are being impoverished by the manipulation of humanitarian aid

In March, the World Bank issued a press release stating that the deterioration in Gaza’s humanitarian situation is preventing economic growth. Among the destabilisation factors mentioned were the lack of access to basic services, unemployment and cuts in UNRWA funding. Israel’s colonial violence was excluded completely from the analysis presented in the press release. Furthermore, the communication also stated that, “Effective governance systems and institutional strengthening under the Palestinian Authority’s leadership are also key for a sustainable recovery.” This was despite it being common knowledge that the PA is corrupt from top to bottom, and there to serve Israel’s interests, not the Palestinians’.

On Wednesday, the World Bank announced recommending an allocation of $90 million “to accelerate much needed economic welfare for the Palestinian people.” In its statement, the Bank’s Group Vice President for the Middle East and North Africa, Ferid Belhaj, clarified the institution’s involvement in humanitarian and development aid, while appearing to exclude politics from the wider framework. Yet, the same formula still applies: Israel is absolved of its crimes which catapulted Palestinians into a dire humanitarian crisis in the first place, while the PA – Israel’s collaborator in depriving Gaza of its basic needs – takes centre stage as a tool for recovery.

In the words of Marina Wes, Country Director for the West Bank and Gaza, “Building on its partnership with the Palestinian Authority, the World Bank will continue its support in strengthening the institutions to efficiently manage public finances and deliver services to citizens.”

Most Palestinians would beg to differ. PA institutions are strengthening themselves to ensure their survival, at the expense of the Palestinian people who are exploited under the adopted neoliberal model. As Palestinians are rendered more peripheral and their exclusion becomes normalised, dependency upon financial humanitarian aid is consolidated. This results in a convenient political approach that adopts the humanitarian context and presents it as depoliticised. As the gap between the leadership and the people increases, with the latter being marginalised further, the remaining actors, in this case the World Bank and the PA, are free to form a narrative of development that plays upon the usual formula of donors and the obfuscation of economic development alongside the prevailing humanitarian situation.

Since leaders and institutions refrain from contextualising Palestinian deprivation within the colonial and collaborative context, the World Bank action is shielded from additional scrutiny. It must be noted that marginalising Palestinians has another dangerous repercussion which is overlooked; Israel’s crimes against them are also pushed aside as the perpetrators are allowed to act with impunity.

There is no empowerment of Palestinians in Israel’s settler-colonial context. Failing to acknowledge this, as well as the PA’s role in maintaining “empowerment” as rhetoric, is contributing to a scenario wherein financial aid is funding the continuation of crimes against Palestinians, while the people are forced to bear responsibility for the institutions’ and leaders’ compromised decisions.

Looking at the statement by UN Special Coordinator Nickolay Mladenov regarding the World Bank announcement, we find a dissociated admission which, besides being repetitive, is also an example of how the UN encourages this neoliberal model: “This significant increase in funding comes at a critical time when urgent interventions are required to prevent renewed conflict and to boost Palestinian economic opportunities and livelihoods.” He also described working with the PA as “exactly the type of response that is needed right now.”

Read: The aid model has been shunned internationally. It won’t work for Palestine either

If, as Mladenov suggests, the institutions are presenting the necessary solutions to the humanitarian deprivation experienced by Palestinians (this, keeping in mind that there is a perpetual cycle of alleged solutions that have solved nothing), is it not time to refute the propagation of the international institutions’ narratives and, more importantly, to expose how Palestinian deprivation is a source of profit for Israel, the PA and the international community? Humanitarian and economic aid should not be manipulated for the benefit of the colonial-occupiers and to the detriment of their victims.