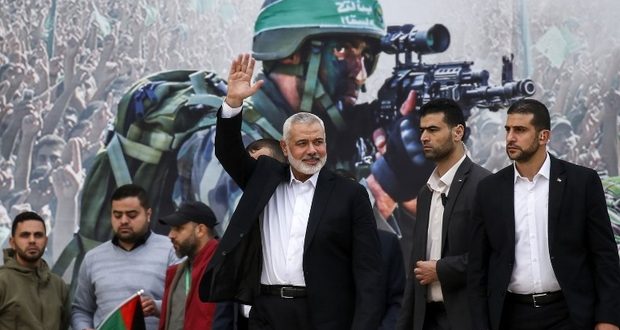 Hamas calls for Palestinian unity as it celebrates founding

Hamas political leader Ismail Haniyeh said he was ready to meet President Mahmoud Abbas to complete the stuttering Palestinian unity process, at an event celebrating 31 years since the group was founded.

The process has faltered since a push towards reconciliation between Hamas and Abbas’s Fatah faction started more than a year ago.

“I am prepared to meet the Palestinian Authority President Mahmoud Abbas in Gaza, Cairo or anywhere to agree on a joint Palestinian agenda,” he said, stating Hamas would be ready for elections after three months.

“We have to go directly to national unity. Reconciliation, unity, compromise – whatever the name, we want it.”

But he also called for the Palestinian Authority to end its security co-operation with Israel after a week when Israeli forces repeatedly raided Palestinian cities in the occupied West Bank in search of Palestinians suspected of attacks against Israeli soldiers and settlers.

He criticised the Oslo agreement, signed in 1994 as the basis of a peace settlement that has not materialized and under which Israeli forces are not allowed to operate in Palestinian cities.

Tens of thousands packed out al-Katiba square in the centre of Gaza, waving flags as chants and a military parade were held on the main stage.

Haniyeh also claimed that Hamas had gathered intelligence on a recent Israeli undercover operation in Gaza which was exposed in November, leading to an escalation that almost pushed the two sides into a fourth war.

“A trove of technical and security information was collected by al-Qassam after the Israeli Special Force’s Infiltration into Gaza. The information will be used to reveal the work mechanisms of the Israeli special forces in West Bank, Arab states and other countries.”

There have been repeated attempts at reconciliation between the two main Palestinian factions since Hamas took control of the Palestinian enclave from Fatah in 2007 but the gap between the sides has remained.

The lack of agreement has proved a barrier to Hamas’s own attempts to complete a truce with Israel that promises an easing of the Israeli blockade of Gaza that has existed since Hamas took control.

Egypt has brokered the indirect Hamas-Israel talks but has also pushed for the Palestinian unity process to be completed first.