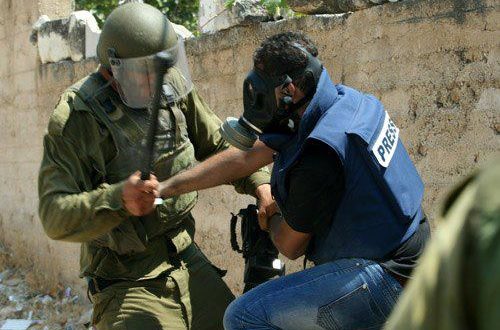 In a report, the JSC said that 66 violations were committed against journalists, including 43 during their coverage of the Great March or Return protests in Gaza Strip.

The report noted that ten were shot with live explosive bullets, 23 were hit directly with tear gas canisters, six fainted due to heavy inhalation of tear gas and four shot with rubber coated metal bullets.

Meanwhile, the report documented 16 detentions, 17 bans on media coverage, eight raids of journalists’ homes, four cases of equipment confiscation and seven journalists being fined, in addition to harassment and other violations inside Israeli jails.

In addition, the report found that the Israeli occupation coordinated with the administrations of the social media platforms and suspended or closed 24 accounts belonging to journalists.

The JSC also revealed “extreme violations” against the journalists, including administrative detention, intentional medical negligence and deporting some of them from their hometowns.

Such violations, the JSC said, are planned to “hide the truth” about the Israeli brutality against the Palestinians and their rights, calling for international organisations to put pressure on Israel to stop its violations and release 21 journalists inside Israeli jails and to stop the use of administrative detention.