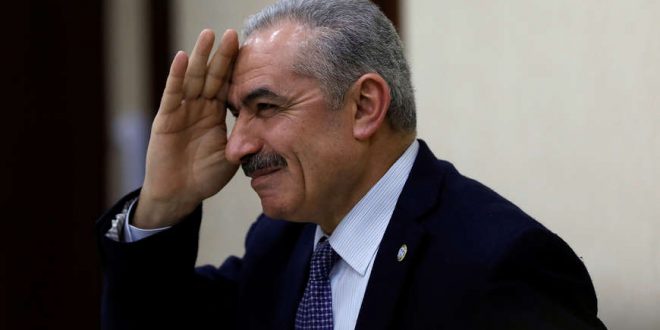 Palestinian Prime Minister Mohammad Shtayyeh said Wednesday his country is going through dangerous times as the Israeli government attempts to undermine a two-state solution through its recent policies, Anadolu reports.

In a statement, Shtayyeh said Israel’s violations are taking place thanks to the U.S. administration, which has made extreme and unjust statements about the rights of Palestinians.

He said the international community’s silence over the violations of Palestinians’ rights was unacceptable and said Palestine’s recent decision to suspend all deals with Israel sought to change Israel’s attitude toward his country.

Emphasizing that Israel systematically violated all deals with the Palestine Liberation Organization (PLO) and did not respect any agreement, he said the Palestinian government only seeks peace and would stick to agreements as long as Israel did its part.

On July 25, Palestinian President Mahmoud Abbas announced that all agreements signed with Israel have been suspended.

The move came after the Israeli government’s demolition of dozens of Palestinian houses in occupied East Jerusalem earlier in July.

Bulldozers accompanied by hundreds of Israeli soldiers moved into the neighborhood of Wadi Homs in East Jerusalem and began to raze several buildings in the area.

Israeli authorities claimed that the buildings were constructed without a permit.

Israel occupied East Jerusalem, where the flashpoint Al-Aqsa Mosque compound is located, during the 1967 Arab-Israeli War.

In a move never recognized by the international community, Israel annexed the entire city in 1980, claiming it the self-proclaimed Jewish state’s “eternal and undivided” capital.

Jerusalem remains at the heart of the decades-long Middle East dispute, with Palestinians hoping that East Jerusalem might one day serve as the capital of a Palestinian state.

All Governorates
2019-08-01
raedsadeq
Previous Egypt takes another stab at reconciling Hamas, Fatah
Next Palestinian President rejects US dictates during meeting with America delegation