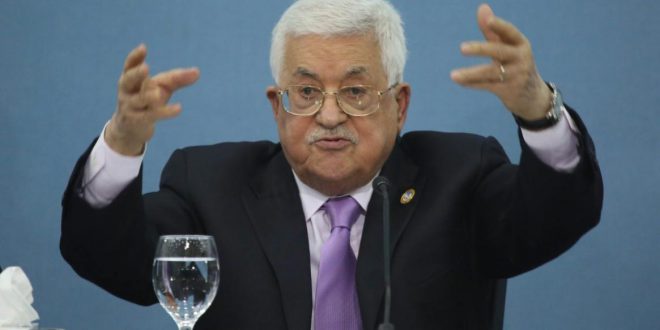 Abbas: If Israel takes Palestinian land, all deals off

If Israel annexes parts of the occupied West Bank, all agreements signed with Israel will end, warned the Palestinian president on Tuesday, reports Anadolu Agency.

“All agreements and their resulting obligations would end if the Israeli side annexes the Jordan Valley, the northern Dead Sea, and any part of the Palestinian territories occupied in 1967,” Mahmoud Abbas said in a statement, according to Palestine’s WAFA news agency.

Abbas’ remarks came in response to Israeli Prime Minister Benjamin Netanyahu’s announcement that he would annex the Jordan Valley and a number of settlements if he wins next week’s Israeli election.

Abbas stressed that Palestinians “have the right to defend our rights and achieve our goals by all available means, regardless of the consequences.”

In a possible election gambit, Benjamin Netanyahu said earlier today that Israel will impose its sovereignty over the Jordan Valley and other settlements in the occupied West Bank if he wins the September 17 Israeli election.

Some 650,000 Israeli Jews currently live in more than 100 settlements built since 1967, when Israel occupied the West Bank and East Jerusalem.

The Palestinians want these territories – along with the Gaza Strip – for the establishment of a future Palestinian state.

International law views both the West Bank and East Jerusalem as “occupied territories” and considers all Jewish settlement-building activity there as illegal.