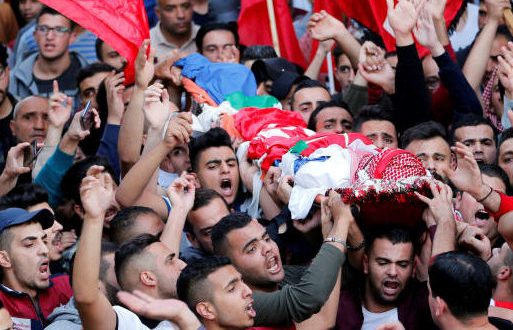 Israeli forces shot dead a Palestinian during confrontations with stone-throwing protesters in the occupied West Bank on Monday, Palestinian health officials said, drawing a UN demand for the incident to be investigated, reports Reuters.

They said 22-year-old Omar Badawi was shot in the chest in Al-Aroub refugee camp, near Hebron city. It was not immediately clear if he had taken part in the protests marking the 15th anniversary of the death of Palestinian leader Yasser Arafat.

An Israeli military spokeswoman said troops were sent into Al-Aroub in pursuit of local Palestinians who had thrown rocks at cars on a nearby road, and opened fire when confronted by “a large number of rioters”, some of them with petrol bombs.

The fatal shooting was under investigation, she added.

Video circulated on social media, and which could not immediately be verified by Reuters, showed a young man with what appears to be a piece of white cloth in his hand emerging hesitantly from an alleyway. A shot rings out and he collapses.

“Shocking to see the video (of) today’s killing of Omar Badawi by Israeli security forces,” Nickolay Mladenov, UN special coordinator for Middle East peace, tweeted, adding that the Palestinians appeared to have “posed no threat to anyone”.

The West Bank, among territories where Palestinians seek statehood, has seen sporadic violence since US-brokered peace talks with Israel stalled in 2014.